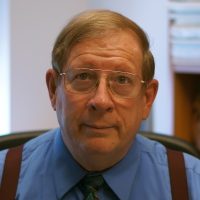 Dr Pullen is Professor of Computer Science and Director of the Center of Excellence in Command, Control, Communications, Computing, Intelligence (C4I) and Cyber. He has been with GMU since 1992, during which time he has served as Principal Investigator for 49 research projects with total budget over $17 million and taught 57 sections of 12 different courses. His doctorate in Computer Science is from George Washington University; he also holds degrees in Electrical Engineering from West Virginia University. Previously he was a Program Manager at DARPA and an Associate Professor of Electrical Engineering at the US Military Academy West Point, NY. Dr Pullen’s research interests include networked multimedia applications, emphasising command and control, networked education and training, distributed virtual simulation, and interoperation of command and control with simulations. In the last named area, he serves as Co-Chair of the SISO Product Development group for C2SIM. Dr Pullen is a Fellow of the IEEE, Fellow of the ACM, and licensed Professional Engineer. He received the IEEE Harry Diamond Memorial Award and the Defense Superior Service Award and was a leader in the team that received the NATO Scientific Achievement Award for 2013.

Back to Confirmed Speakers