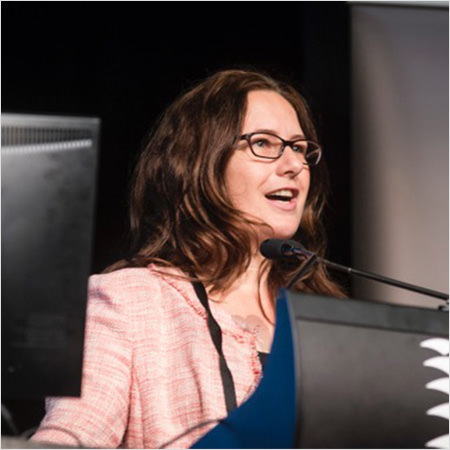 After graduating from a small country school, Deanna completed a business degree majoring in marketing before embarking on a career that has meandered through a variety of roles, all of them connected by a common thread of technological change. Her introduction to organisational culture change and disruptive technology was a baptism by fire; she moved from a relatively conservative student advocacy role in a regional university to work in a small team rolling out elearning in a metropolitan polytechnic college. In this role she would start her informal education about organisational cultures, and begin a lifelong respect for the critical role librarians and provocateurs play in leading technological change.

In 2006, Hutchinson discovered a passion for simulation and virtual reality, working with trainers and senior leadership teams across mining, healthcare, defence, transport, and manufacturing to design and implement complex simulation projects. In 2007, she repurposed a military tool and introduced serious games to the mining industry as Project Canary. She was elected to chair Australia’s international simulation conference, SimTecT, from 2008 to 2013 and from this platform joined the international simulation community, forging strong relationships with organisations and thought leaders in Europe and the Americas.

In 2013, she acknowledged a personal frustration that she still couldn’t go to a party and say “I’m a simulationist” (as the profession is yet to gain formal professional status). It bothered her because it’s a thrilling destination for graduates of STEM and creative studies alike. It bothered her because these are the jobs of the future. So she published a magazine, with the express purpose of showcasing this diverse discipline and the people in it.